The three pieces of Sounds of Calligraphy playlist are the continuation from the Sarana performance at the opening of Viiva & Viiru calligraphy group exhibition in Helsinki, Finland. The pieces are based on a real time process that analyzes the images in three color channels, and some of the oscillator sound waves are derived from the image properties too. The process has 128 oscillators and filters per channel, and they are positioned to the stereo panorama to exactly follow the figures. The resulting music is thus a true voyage across the image.

The sonification process was realized with Max/MSP/Jitter. A very warm thanks to the Viiva & Viiru group for their openness to the abstract. 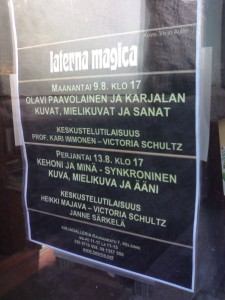 A solo musical project since the beginning of the universe and beyond. Several live performances, which usually take hours to fold out, and hundreds of single tracks produced over the years. Approaches the laminarity and supraconduction through intuition, improvisation and unpredictability. A psychophysical expedition on the wavecrest of the caleidoscopic reality.

Soiva kaupunki is an interactive sound installation, which utilizes contact microphones to reveal the hidden properties of the resonant urban trash (Soiva kaupunki = Resonant city). The recording is from year 2002 installation.

The objects are gathered in an intuitive and improvised fashion, and hung by wires to make them float freely. Microphones are attached to the objects and their output is fed through effects processors in order to turn the characteristic sound of each object into an ever changing ambient collage, to which all the participants contribute by manipulating the objects.

Luonne never rehearses together and the freeform collective meets almost only on gigs, refreshing the unforgotten memories and past future experiences via the air, that is vital to the human organism in this world of relative dependencies.

Releases and live performances available from the Archive