A few songs from the soundtrack of Anni, a Finnish indie feature film. The songs have been written, performed and produced by Simo Salo, and they are presented here as mix demos on my behalf.

I worked as the sound designer for Anni, a Finnish indie feature movie production. I also did on site recording, foley effects and mixing. The movie was directed by Jussi Einola and produced by Joonas Einola.

Besides mixing the movie soundtrack I also mixed and mastered the music and created a few original pieces using material from the composer (Simo Salo).

Anni uses samples and source material by Freesound.org contributors, who are listed below.

END_OF_DOCUMENT_TOKEN_TO_BE_REPLACED 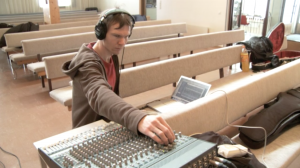 Muutos is a traditional Christian indie feature film, to which I took a part for some time. I was present at a couple of shootings as a recordist, created a couple of ambient atmospheres and designed the sound.

The video depicts a scene from a short feature ‘Astronautti’, which was directed by Topias Parkkonen. The sound player has the complete sound track, which consists of five pieces. The first four pieces are tied together by one low frequency sound. When the protagonist is releaved from his childhood traumas in the ending scene by the help from a girl he has fallen in love with, the low frequency sound ceases to haunt him.

The melodies and other material from various analogue synthesizers were recorded straight to the sound editor without much rehearsal or careful composing. The film was played on the screen at the same time and the feeling of the scenes and the story intuitively transformed into music.

The method didn’t allow any midi sequencing, because there wasn’t any specific tempo set and the sounds of various synthesizers was directly recorded. During the editing phase the sounds were further processed and cut to fit better to the events of the film. The method was fast, sensitive and intuitive, and the result organic and fitting.

The sample is from the second song of the three song set Muutos performed at Gospel Savo event in 2009. The drums were electronic and their sound was available only in two channels, so they couldn’t be mixed in as properly as would have been best. All of the other instruments were recorded individually.